For weeks now rumors have been circulating that Nicki Minaj just might be expecting the next hip-hop superstar baby with her boyfriend and tour-mate Meek Mill. The two have been playing coy though, so it’s hard to separate truth from rumor, so we thought we’d step in to investigate!

It seems as though the rumors started after certain requests from Nicki and Meek’s tour leaked. Apparently, Nicki’s tour manager put in some very unusual restrictions, requesting that no cigarettes or weed be smoked at any of the venues they’d be playing. This request was then echoed by Meek’s entourage, who allegedly went around to clubs that the two would be attending with the same restrictions. This started the speculation, as, of course, pregnant women aren’t supposed to be around smoke.

It’s a pretty small thing to base the assumption that she’s pregnant—after all there could be many other reasons why someone wouldn’t want to be around smoke. However, things got very serious when Nicki told a crowd in Pennsylvania to “Make some noise for my baby father” while she was sharing the stage with Meek. The video shows Nicki giving a big smile and laugh after that statement, but is it laughter of excitement for her news, or a laugh at the expense of everyone spreading these rumors?

After that video circulated, rumors got even more specific, claiming that Nicki was 8 weeks pregnant and that names had already been chosen (Omeeka for a girl, and Robert Jr. for a boy). Pretty quickly afterwards though, TMZ ran a story denying the rumor, explaining that sources told the outlet that Nicki just uses the phrase ‘baby father’ for anyone she feels close to. But that seems like a pretty strange nickname to just throw around if you ask me.

So, what’s the deal? Is she pregnant or not? 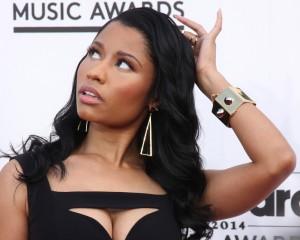 Nicki and Meek are such a publicly affectionate couple, and Nicki has been so honest about her personal life in the past, that it seems strange that they’d remain so tight-lipped in the face of these rumors. Maybe they’re just waiting until she’s a bit farther along before going public, but with the belly-baring outfits Nicki’s been wearing on tour, we might be able to figure it out for ourselves soon if she starts showing!

About the Author: Marie Kličková