Celebrating the very best of pop culture, the 2018 People’s Choice Awards were a huge success. As with any other star-studded red carpet event, one of the highlights of the awards was checking out what all the celebs were wearing.

Here are the 12 best outfits from this year’s People’s Choice Awards: 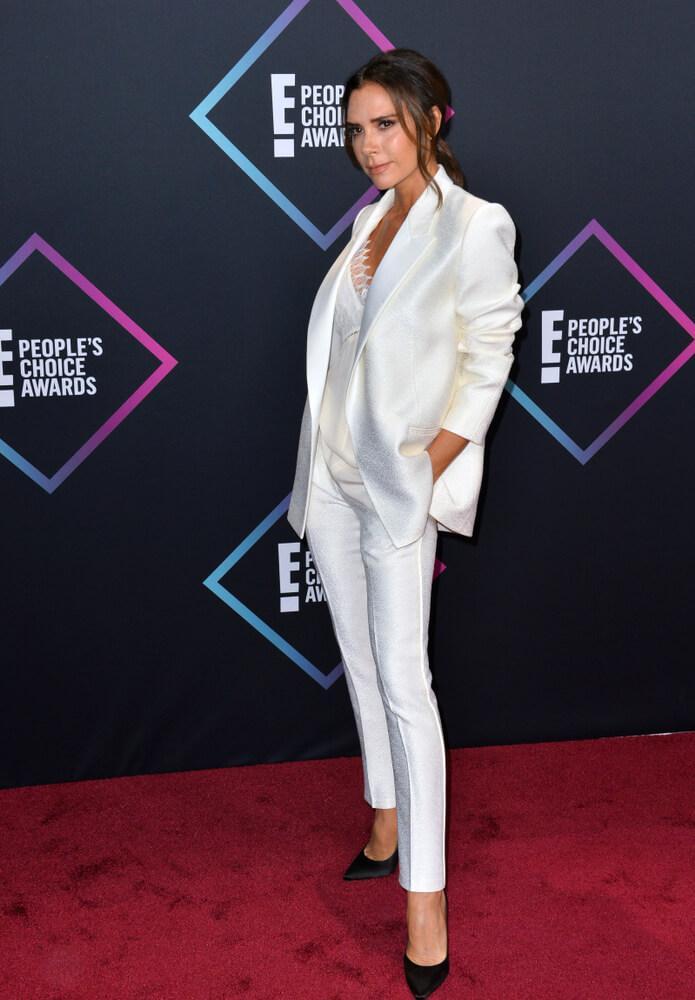 With Victoria Beckham being named Fashion Icon at this year’s People’s Choice Awards, it shouldn’t come as a surprise that the outfit she wore on the night was one of the best.

As soon as Beckham made an appearance, questions about her pant suit started flying, with fans wanting to know where they could buy their own.

Unfortunately, this silky, slim-cut, textured suit isn’t available to the public just yet…

The suit was custom designed by Beckham herself, but will be included in the next Victoria Beckham collection.

Of course, it wasn’t just the suit that stood out. The way in which Beckham styled the suit made her outfit even more special.

How did she style it?

She paired the suit with a simple, lacy top and black heels, making the suit look sexy rather than severe.

The Corset Top and High-Waisted Pants Worn by Scarlett Johansson 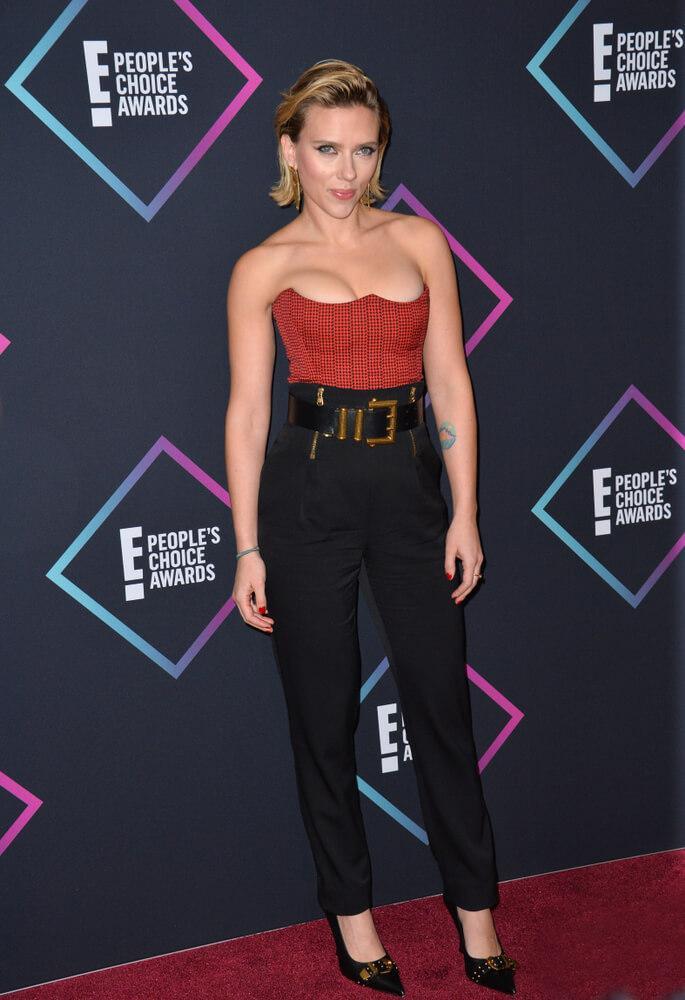 Not only did Scarlett Johansson win the award for Female Movie Star of 2018 and Action Movie of the Year, but she also topped many best-dressed lists for her outfit on the night.

Johansson turned heads with her Versace corset top, which featured an inverted sweetheart neckline. A neckline such as this can be hard to pull off, but Johansson managed this perfectly thanks to the way in which the rest of her outfit was styled.

Paired with black high waisted pants, as well as slicked back hair and winged eye makeup, the actress exuded an edgy, rockabilly vibe with plenty of attitude. 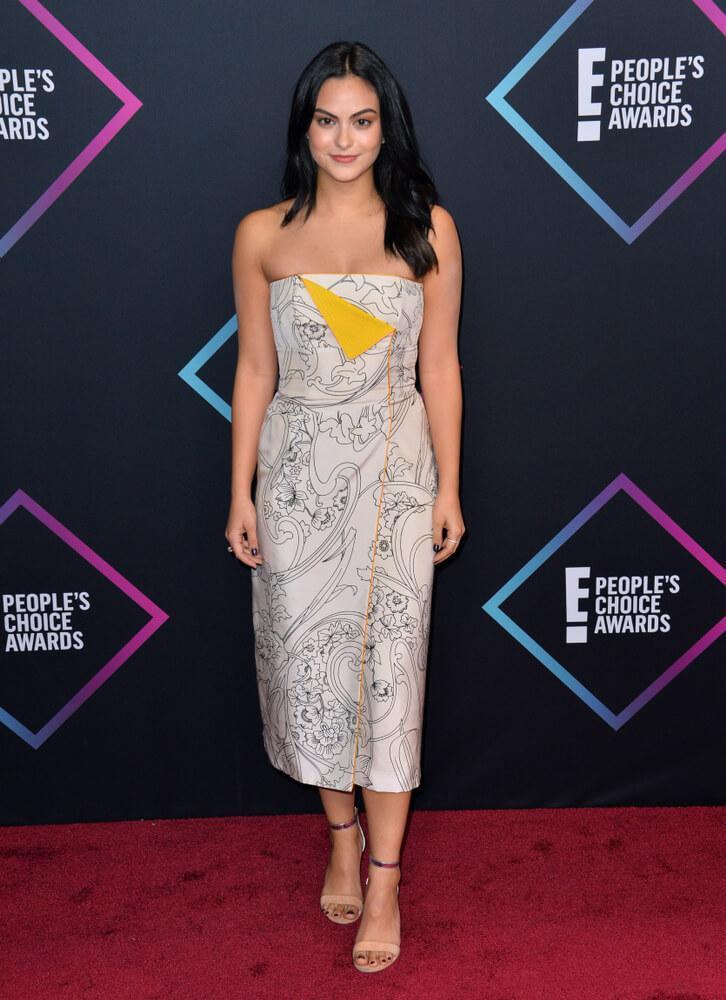 Riverdale star Camila Mendes was one of the only celebrities at the 2018 People’s Choice Awards to opt for a printed dress with a simple silhouette.

While this may be the case, the dress really did stand out on the red carpet, making Mendes’ outfit choice a great one.

The dress was designed by Etro, a brand who is known for their vibrant and energetic prints.

Want your own printed Etro dress?

Etro primarily focuses on florals and prints inspired by other aspects of nature, along with delicate, precious fabrics. They boast a wide range of dresses, consisting of everything from floor-sweeping maxis to figure-hugging minis, giving you plenty of choice.

What did Mendes wear the dress with?

Minimalistic jewelry from Clean Origin, along with beautiful shoes from Tory Burch. The entire outfit was chic and slightly understated, but the red carpet really enhanced the beautiful simplicity of this look. 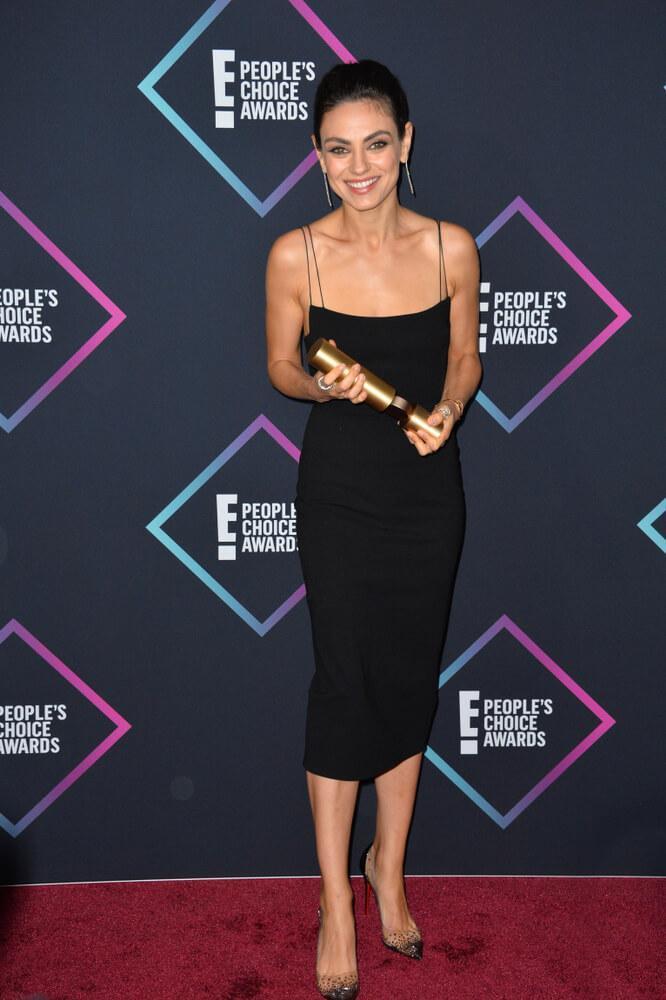 What do you wear to an event when you want to keep your outfit classic?

A little black dress of course!

This is the route that actress Mila Kunis went down, sporting a 90’s inspired, slip-style LBD with delicate spaghetti straps. With a straight neckline and a silver zipper at the back running all the way down the dress, this was quite a simple outfit, but one that really flattered the actress.

Alex Perry, a prominent Australian fashion designer who is known for his luxury womenswear. The dress sold out online soon after Kunis was seen wearing it, so you may have to wait a while if you were hoping to bag one for yourself.

When it came to styling the rest of her outfit, Kunis kept things classy with embellished heels from Christian Louboutin, along with delicate, dangling earrings. 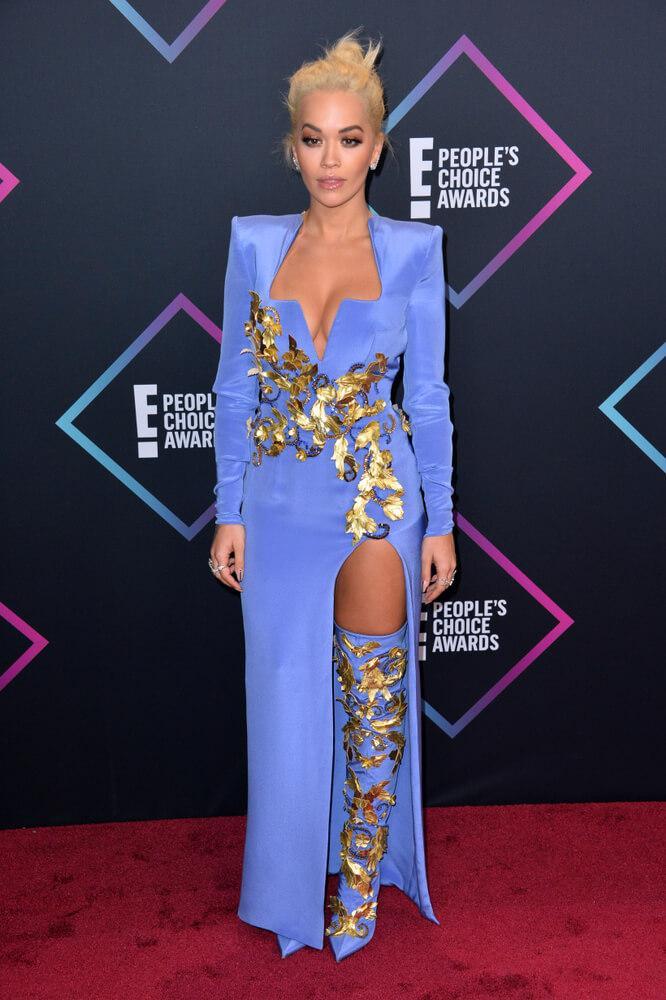 While some celebs chose to keep their outfits for the event relatively simple, singer Rita Ora decided to take things in the other direction.

Jaws dropped when this star stepped out onto the red carpet in her embellished Versace gown, complete with pointed shoulder pads to make this dress look even more mythical. The lilac shade of the dress softened this look down, while the plunging neckline added to the dress’ sex appeal.

The figure-hugging dress featured a high slit that showed off the singer’s toned legs, while the the thigh-high boots that Ora wore with the dress finished the outfit off perfectly.

Rather than keeping accessories simple, Ora decided to go for something extravagant with this too. Her jewelry was quite bold, with diamond stud earrings and stacked silver rings, while her makeup, with accentuated lashes and smoky eyes, gave her look a mysterious edge.

How about her hair?

This is where Ora decided to go simple, with a casual and slightly messy updo, complete with strategically-placed strands of hair to frame her face.

Although Ora wasn’t nominated for any awards at the event, she performed a show-stopping rendition of Let You Love Me, along with a troupe of male dancers. 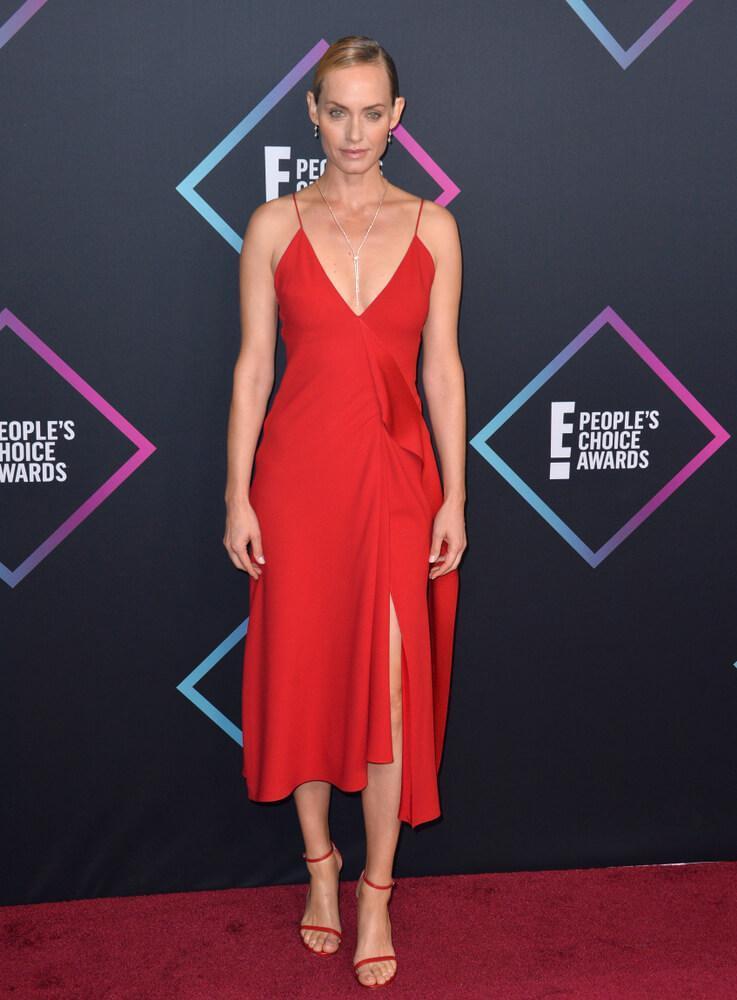 You can never really go wrong with a classic red dress for a celebrity event, and this is exactly what Amber Valletta was hoping for as she stepped onto the red carpet.

Valletta attended the event to present the Fashion Icon award to Victoria Beckham, and decided to show off Beckham’s fashion skills by wearing a Victoria Beckham dress herself.

The red wrap dress with its plunging neckline and asymmetrical hem featured a thigh-high slit on one side, along with frill details on the other, both of which balanced each other out so well. The dress was midi length with delicate straps and a silky fabric, giving Valletta a smart and sleek outfit.

What did she wear with this stunning dress?

A pair of simple strappy red heels, along with a diamond necklace that accentuated her cleavage. 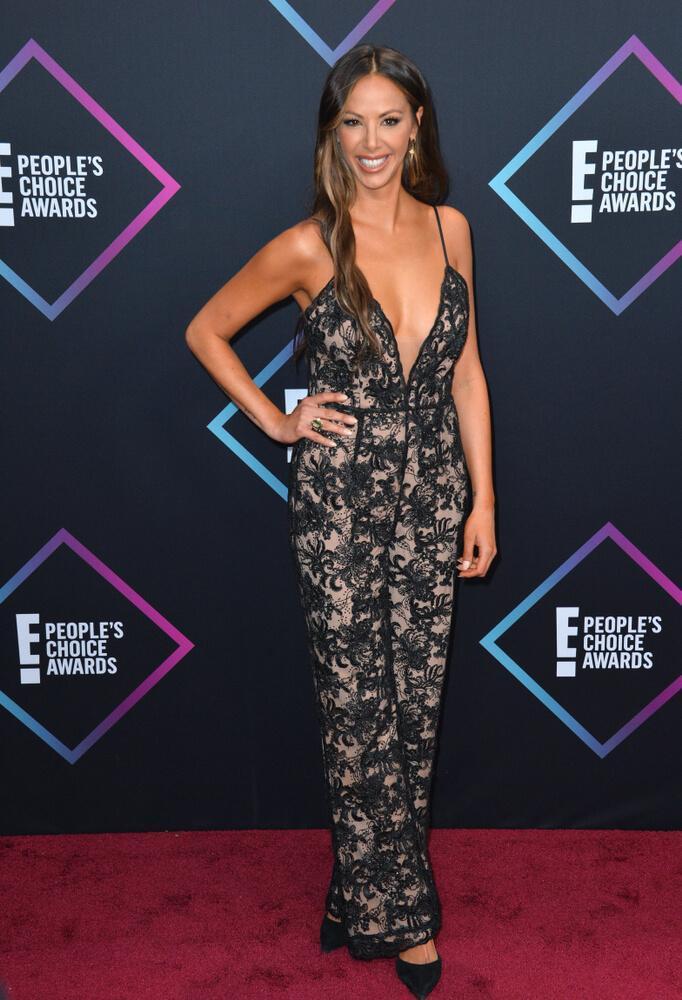 With Vanderpump Rules being nominated for Reality Show of 2018, it came as no surprise that the entire crew was in attendance at the People’s Choice Awards.

Most of them wowed with their outfits, and Kristen Doute was no exception.

Doute decided to opt away from a traditional dress, and instead wore a lacy jumpsuit. The plunging neckline, along with the impeccably tailored jumpsuit, flattered Doute’s figure beautifully, keeping things simple but classy.

Jumpsuits have been having their moment quite a bit lately, with a number of celebs being spotted in one.

Never worn one before?

Here are some tips to help you to pull off a jumpsuit: 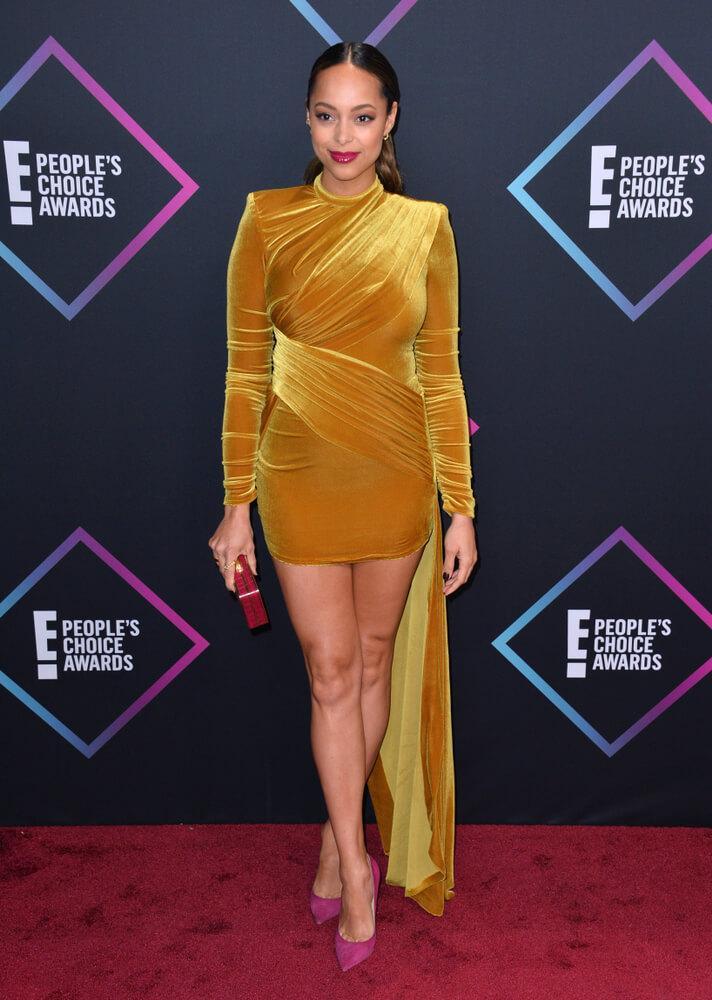 Actress Amber Stevens West gave birth five weeks before the People’s Choice Awards, but was still able to show off her stunning figure at the event.

The dress that the actress wore definitely made people look twice.

Because it was such a vibrant and vivid shade of gold, although some would say that it was closer to mustard. However you would define the color, West was the only star at the event wearing it, and this really helped her to stand out from the crowd.

Although the dress was short, falling to the thighs, it featured a longer train on one side, giving West some extra coverage. The rest of the dress was relatively conservative, with long sleeves and a high neckline, preventing the outfit from looking too overdone.

Michael Costello, an American designer who has dressed multiple celebrities in the past.

West kept her makeup and accessories simple, allowing the dress to really speak for itself.

Many fans weren’t sure whether or not television host Renee Bargh would be attending the People’s Choice Awards, because she fell ill with the flu just a few hours before the event began.

However, Bargh fought through and showed up looking gorgeous in a floral dress. The embroidered dress hugged Bargh’s body in all the right places, with her figure accentuated by the high heeled black pumps she wore with the dress.

When it comes to floral dresses, many choose to save these for the day rather than wear them at night.

However, take some tips from Bargh….

By pairing your floral dress with some heels and quality jewelry, you can rock a floral dress no matter the event or the time of day. 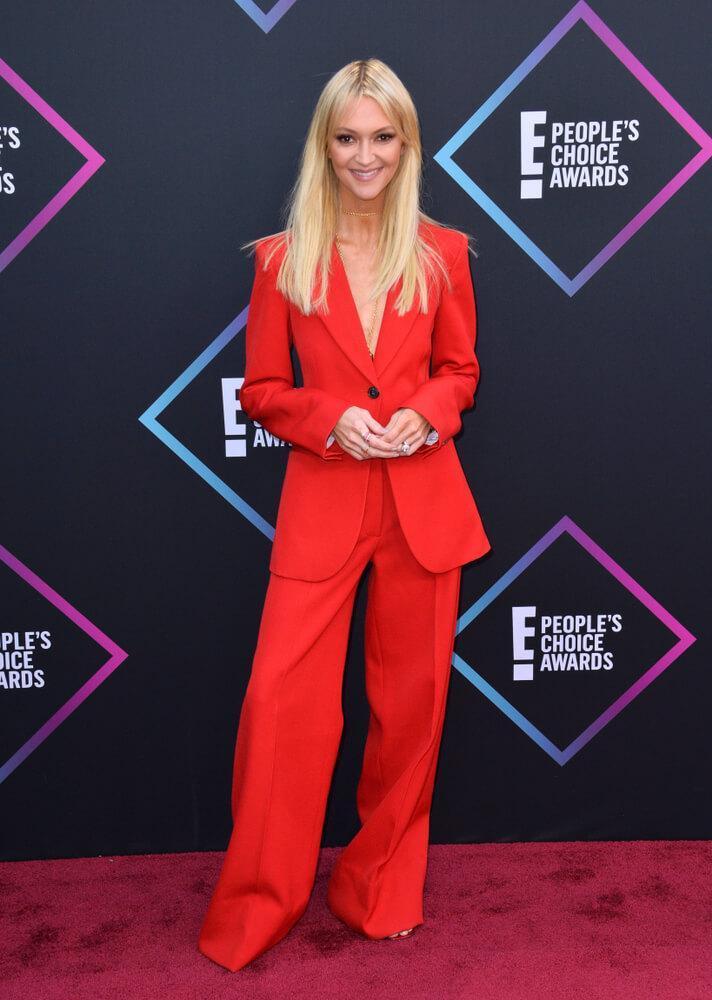 Victoria Beckham gets yet another mention on this list, thanks to the outfit worn by Zanna Roberts Russi. Being the editor at large of the USA edition of Marie Claire, it goes without saying that Rassi’s outfits are usually impeccable, and this one was no different.

Rassi kept her hair, makeup and accessories simple, enabling the suit to really make a statement.

It can be hard to find a dress that is sexy and provocative, but chic and classy at the same time.

However, Kat Graham managed to do exactly that for her People’s Choice Awards outfit.

A wonderfully dramatic dress by Chalayan with a plunging neckline. The dress featured one long sleeve, with the other sleeve consisting of a billowing cape. The thigh-high slit also added to the outfit, balancing out the volume created by the cape sleeve and giving the outfit a sexier touch.

Worn with black heels and minimal jewelry, Graham managed to pull off this dress exceptionally well.

It made waves back in 2012, when it was worn by Zawe Ashton to the Cosmopolitan Ultimate Woman of the Year Awards. The dress itself was from Chalayan’s Fall 2012 collection, and while that may have been some time ago, the way in which Kat Graham pulled it off kept the dress looking current and relevant.

The Sequinned and Feathered Gown Worn by Erin Lim 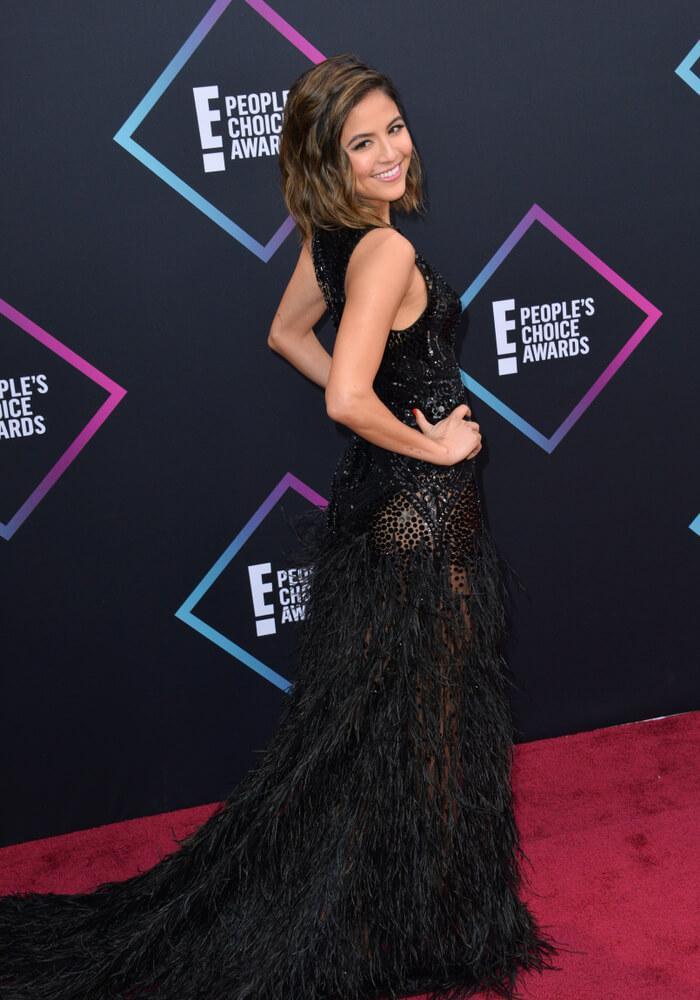 Television host Erin Lim was another star who decided to go extravagant with her outfit for this year’s People’s Choice Awards.

A floor-length black gown. This may not sound like anything special, but this gown featured a sequinned bodice and a feathered skirt, providing such a contrast in texture. There were sheer elements in the skirt too, making the dress much sexier than you would expect. This was a dress that really sparkled, helping to throw Lim right into the limelight.

With the dress itself being so loud, Lim kept the rest of her outfit minimal, opting for black heels and simple jewelry on her wrist and her ears. Of course, a pop of color for an all-black outfit is a must, and Lim did this with her nails, opting for a vivid and classic shade of red.

It is always fun taking a look at what different celebrities wear to big events, and the 2018 People’s Choice Awards was no exception. While some celebrities, as always, went extravagant with their outfits, others kept things simple and minimal, providing quite the contrast in the different looks seen that night.

About the Author: Alina Jumabhoy